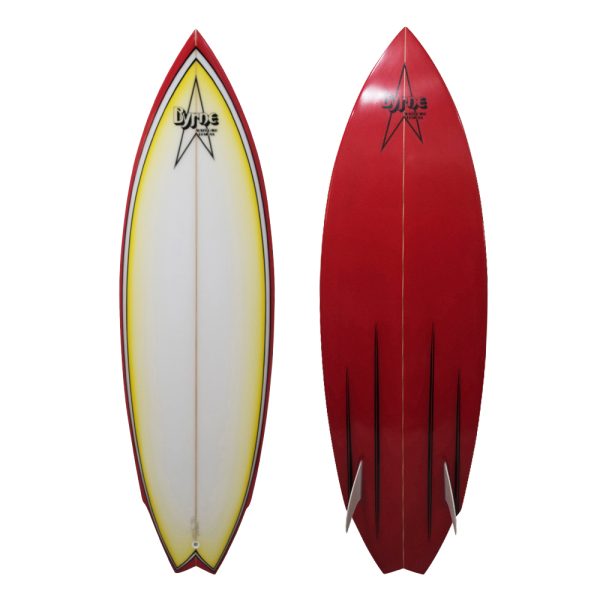 The clinker twin evolved from the Australian Byrne surfboard factory in 1979 and was inspired by a then factory worker Brian Coombs who tried some channel bottom single fins boards in New Zealand. This was pretty much at the height of the twin fin era.

The clinker twin evolved from the Australian Byrne surfboard factory in 1979 and was inspired by a then factory worker Brian Coombs who tried some channel bottom single fins boards in New Zealand. This was pretty much at the height of the twin fin era. With Mark Richards winning world titles on twins a lot of surfers were riding them because compared to a single fin they were looser and faster especially in small beach breaks. The problem with most twins was it drifted quite a bit in power moves especially on your backhand and this didn’t really suit a lot of surfers who were coming off single fins. By incorporating channels or more so flatter deeper ones that Byrne called clinker channels the drift aspect was largely eliminated.

They were given the clinker name because they were very similar and resembled that of a clinker planked boat.

The main feature of the four ribbed clinker design for a surfboard is that the outside clinker is very deep and comes out at the rear rail of the board adjacent to the fin. The centre clinker is longer and fades out before the tail. The main function of the clinkers is that they reduce significantly the amount of drift in the twin fin.This is done in two ways.

First, the clinker exiting near the fin actually acts like an extra fin so giving the board more bite and projection. The second is that the actual deep clinkers across the board acts as a resistance when the board is put in a position to drift. Also as a bonus the centre clinker allows the water to pass to the tail quicker resulting in more speed.

The clinker twin was used by Chris Critter Byrne to much success on the world tour at the time elevating him to a 5th place rating on the then ASP.

The clinker twin was thought by many to be the most advanced twin of the time and before the evolution of the thruster the same and still done by one of the best performing boards about.

The clinker twins available now are a direct duplicate of the ones made in the late 70’s.Even the spray designs are the same done by the original spray artist, Terry Cooper.

The shapes are also done by Phil Byrne and Laurie Byrne also the original shapers of the design. The decals are also an exact duplication.

This is a must have board to have in your board collection. A great board to ride and a part of surfboard history.

They are only available in Australia and Japan.